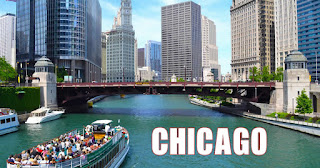 
Chicago's bid for Amazon2 is a cheeky Star Trekky (a nod to known super Trekkie Jeff Besos here) homage to brilliant delivery by William Shatner (not a Chicago native) I have to add that whoever directed Shatner's read, more than likely the copywriter, did a fantastic job both with him and even more so with the brilliant copywriting.

The video is fabulously edited with tons of quick cuts and pauses in lock-step with Shatner's delivery. It's a highly bespoke video where seemingly futuristic shots and abstract visuals are quick cut and shaped into interesting visual heights. The music is again based on the Star Trek theme but not overly so that it vampires the message. Plus there are wonderful futuristic layered sound effects punctuating the visuals and copy that makes the overall feeling of this message otherworldly. Everything is perfectly balanced in this presentation. It is in a word, stunning.


Again I have to go back to the copy. There are no apologies here. This is no meat and potatoes presentation. This is all about the future for a city that is already well into it. Close your eyes and just listen to Shatner's delivery and it is magic. His intonations, his low key yet steady familiar voice is subtle in its meaning...a pause, a slight upturn to his voice, is enough to convey he is the reassuring and familiar captain of Enterprise now located in Chicago.

It is just so clever and smart.

The Chicago video really takes the pitches to a new level.

What's interesting is how this video subliminally makes you feel like things are moving in Chicago at warp speed. And isn't that what Amazon is all about as a company? Chicago presents the future by positioning itself as already being there.

Again, it is just so clever and smart.

And ultimately this is what a new business pitch has to be.

Great ad agencies in the day used to do these. They took weeks of planning, weeks for development, weeks to flesh out and produce. And Chicago's pitch video has all those qualities. And it isn't surprising given that Chicago is one of the three main ad agency cities in the U.S. It shows.

Chicago is now one of the twenty cities still under consideration for Amazon2.

http://creativity-online.com/work/chicago-amazon-pitch/54194
Posted by The Fox and Hound at 9:17 AM No comments:


Move Here Move the World is the theme from Detroit. It speaks to up and down times and coming back from the rust to reconfigure again. Detroit's new kind of assembly line rejigged to startup and move forward. Dreamchasers, builders, movers who are determined to move the world again. It's hard driving copy. An anthem plea from a city that's been abandoned. Their pitch is a prayer and reminder from a people who were sold out by the very American industry that built and brought generations to the city of movement: Motor City.

Detroit needs an Amazon. It needs a jolt of jobs, of income, of reconfiguring industrial land that has fallen to waste.

But Jeff Bezos won't be falling for any hard scrabble story. He has no interest in making his mark by saving a city no matter how much it is deserving of it. Quite the opposite.

Detroit needs major investment to be able to turn around and revitalize their crumbling infrastructure, schools and bare bones basic services that now hardly exist. So Detroit's incentive package to Amazon comes from a weak position compared to other cities in the race. And therein lies the rub for Detroit. Detroit has an uphill battle, not just with Amazon but with any major businesses considering them as a possible relocation city. I am sure Detroit would have to present bigger tax breaks, bigger and more incentives which could put their city in jeopardy of ever breaking even on such a deal.

Detroit's video is fabulous. The copy is brilliant. The reader is strong and hard driving and proud. She reflects the perfect tone of Detroit in all it stands for. It's very emotional without being soppy or maudlin. And it's memorable.

Detroit's reinvention won't be overnight. It can't be. But they are making inroads, they are attracting
small businesses and with pitch videos like this who could resist the opportunity to get in and really reshape and redefine a city. For Amazon2 this could have been their defining moment for America.
But Bezos isn't about America. He isn't about helping people or cities or anything remotely humanitarian. Bezos is one of our Robber Barons right up there with Fisk, Gould, Schwab and all the current big corporate banks and businesses where bonuses exceed performance and the 1%
trumps all.
Posted by The Fox and Hound at 8:56 PM No comments: