Cannes had a thin lineup of "creativity" this year....

When a gimmick like Fearless Girl wins the majority of Cannes Lions it's a red flag (note the similarity to a red cape used in bull fights) to me,  that all is not well in the creative departments of today's agencies. 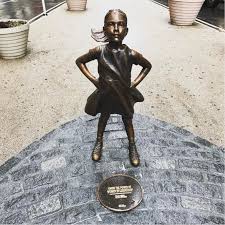 This 3-dimensional Latina Disney character is so PC it makes me gag. And the spin of this being representative of women occupying a place within Wall Street boardrooms or any boardrooms, again makes me roll my eyes and gag.
This "character" isn't going to change anything for women. The fact that it's "known" in every country doesn't mean anything either....that just means it went viral as many bad, stupid and "timely" things do. It also got lots of p.r. which was placed probably by McCann or their media affiliates. And if "timely" was the criteria....than the "break dancing gorilla" on youtube that has more awareness than this Disney Fearless Girl character would have been a real contender at Cannes too had it been entered.


I am sure all the male Cannes jurors that voted for this are patting themselves on the back. They've filled McCann NY's trophy case as well as given an official nod to the women in business aspect of business.
Now all the men in the adgame are hoping that at last this hot potato has been placated by having been gratuitously and politically awarded up the yahzoo. The adboy players can once again congratulate themselves in having done their part for acknowledging the little ladies attempt at trying to break into the bastion of corporate boardrooms. And can now get back to the real business, the manly ad business. And this will all go away.

In the meantime, this vapid Fearless Girl Disney cheesy David n' Goliath metaphor will now only be  collecting bird guano and yes, be forgotten. Oh but wait... it will be good for selfies....mustn't forget that...

What is amazing to me is ad people just don't see this as a gimmick. And that is the only real category this should have been entered in at Cannes. It should actually be a new category at Cannes because it would make a lot of money for the show....as most of the entries would fit here.

But I guess the millennial creative people don't know what a "gimmick" is. So all you millennial's
that call yourselves creative here's the meaning of gimmick that's relevant to you:

"a trick or device used to attract business or attention."

So no matter how you are spinning it out there....Fearless Girl is a trick....and yes, it got attention....

but I thought great advertising creative was also supposed to ..... really make a difference like actually moving the needle for measurable business results.

Posted by The Fox and Hound at 5:01 PM No comments: