First let's look at Tim Nudd the writer of the article I am going to write about regarding Young Agency Creative Work that is ahead of their time that appears in Adweek.

Yet Tim Nudd is making creative judgements and crowning who will be the next creme de la creme
in the advertising creative departments of the future.

I don't believe a thing Tim Nudd writes because basically he has no expertise in the advertising field
other than what he just does or doesn't like.

Yet he has been put into a position of determining career paths and promoting creative individuals
in the advertising creative field.

It's kind of like when I see People magazine's: The Sexiest Man Alive covers. I always used to wonder what or who or how it was decided who was to be the sexiest this...the smartest that etc.
I wonder now, did Mr. Nudd used to make that decision too?

One must question what his criteria was for this particular article that touts how the new crop of young creatives are generating work "ahead of their time".

I looked at this work and these young creatives and while I see work that has generated a lot of PR,
I don't necessarily agree that it is "ahead of their time."

Nudd first declares the statue of "Fearless girl" to be forward thinking.  It was in fact commissioned by State Street Global Advisors and if these two creatives came up with this idea, then I sadly question their idea of empowerment.  And it's a gimmick confronting another gimmick. As a woman I find this is anything but a symbol of female empowerment. Frankly it's insulting to me. It says to me: here's a child who hasn't got enough sense/maturity/brains to get out of the way of an aggressive animal. But it got a lot of attention. So did the dog peeing on her leg that was placed there by Di Monica, the artist who created the charging bull. But that didn't get a mention by Nudd.

Now let's look at the Evan not for profit ad. First let me just say that historically, not for profit work is done pro bono....and it offers creatives a chance to really do work that can be provocative, startling and generate sympathy or action more often than not through fear. Also not for profit ads are used as a chance to add some creative hardware to your trophy case and an opportunity to showcase your creative firepower as an agency.

More than ever there seems to be a ton of not for profits for every imaginable cause, so agencies can also 'cherry pick' the cause du jour for their shop. Often the creative will only have to run once on public media at some obscure early morning hour to qualify for award shows.

This effort is for Sandy Hook Promise "know the signs" not for profit.


This campaign about spotting the signs of possible gun violence seems creepy somehow.  It's promoting fear, spying and reporting someone you "might" think is a possible nut job killer. Or if you have it in for somebody at your school, an idea planter for reporting them ....  This is all about Sandy Hook. The subliminal fear piece is like a bad "where's Waldo."

It ticks off the laundry list of signs the Sandy Hook group has developed one by one to spot a shooter and is demonstrated by another student behind and over the shoulder of the main person you have been tricked into watching. It isn't until after the silly frontman is finished that the ad recaps what was
going on behind Romeo's back while he was defacing school property.
I think it's corny.
Now I totally understand why the creativebros decided to use this technique because it
heightens the surprise and answers the laundry list brief....however, is it Pencil-worthy?  Again it just seems corny and very very thin creatively to me. It's kind of like watching the boring school health 'use-a-condom' movie playout over the shoulder of this other kid.

For me, as a working Creative Director it's always about effectiveness. How well did this really raise awareness? How well did this contribute to ending senseless gun violence. So it goes beyond the executional action or storyline when I evaluate these initiatives for long term awareness.

The odds for dying in a car crash are much much higher.

If I were Mr. Nudd I would just YouTube a few really empowering campaigns that are effectively working.
Like DDB's Water is Life campaign. I think those creatives need a shout out for the fabulously effective work they are doing to raise awareness about a REAL problem. So kudos to whoever the creatives are on that initiative.

Here's one of their ads.
The real shock here comes from the truth of life expectancy in 3rd world countries. It has integrity.
That's a quality that Mr. Nudd seems to have overlooked in sighting the Sandy Hook campaign.
I think he chose it because it went viral.

The "yes.good." idea using social media feedback again has been done and better. The most famous one being the competition for Doritos Super Bowl ads.
Then there is the Starbuck's white cup contest, the Lays "Do us a flavour" campaign etc.etc.
I find the position line of: "Yes Good" to be one of the most dummied down positions I think I have ever heard of. It resonates at about a 5 year old level.

Then there are chat-bots and mom bots, video games and more techno gimmicks....

And for all of these ideas only ONE that Mr. Nudd mentions has any originality and brings a fresh point of view..again it is for a not for profit. It was Jessica Toye's new alphabet design for the News Literary project. Her brilliant approach turns the alphabet into warning symbols. And the unusual idea of turning the letters is a brilliant double entedre for "twisting the truth." Kudos to Ms. Toye, JWT NYC and finally to Mr. Nudd for finding ONE really great idea that's timely not ahead of its time. 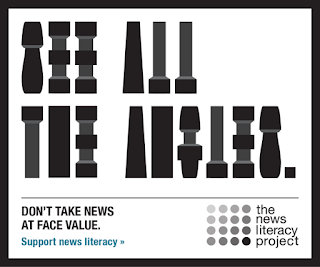 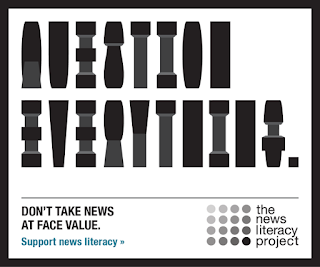 Mr. Nudd  obviously knows how to write a lead article be it good or bad. But for me, he sadly lacks the genuine credibility needed to make such a determination of talent, whether the work they are producing is  "ahead of its time" which really doesn't mean anything other than an attention getter as a headline.

Maybe the typeface needed for his article should be Ms.Toye's. Or maybe Mr. Nudd should go to work as an ad agency copywriter for a few years before he is given to such proclamations.

Posted by The Fox and Hound at 5:34 PM No comments: