Dos Equis has dropped the agency that created The Most Interesting Man campaign and is moving the account over to Droga5. 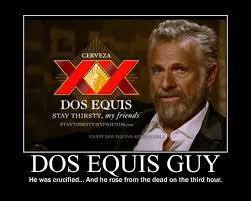 My blog post of October 2016 gave Dos Equis second attempt at launching the grease ball guy campaign, what I called the Revamp part 2  the abysmal attempt at being the most interesting man in the world a total BOMB review.

In that posting I knew then it would be the end of the Dos Equis/agency relationship. I am just surprised it has taken this long to be announced.

Both the original campaign which was one of the most successful and this dull, horrible mediocre
attempt at a refresh...not once but twice up to bat with the grease ball were created by EuroRSCG
now HAVAS.

It's a sad ending to what once was a niche beer that carved a real presence in the tough tough beer drinking market built on the advertising alone and actually was a brand that was as popular for the advertising as it was as a brand of beer. Unheard of.

Jonathan Goldsmith was the cult leader of this brand. And not many brands can claim or will claim a spokesperson actually can make or break a brand. But in this case, it's true. He's been copied, memes by the ton have been written around his character....it just goes on and on.

And Goldsmith must feel some vindication now. They parted ways over a contract dispute. And how
EuroRSCG now HAVAS,  must be forever kicking themselves about this....

HOWEVER, this is all beer under the bridge now.

And again it will be an interesting exercise to watch what Droga5 does for this brand. Hopefully
they will walk away from the greasy guy and start with a clean shot at creatively coming up with a whole new way of looking at Dos Equis.

Part of the problem will be satisfying Heineken, the owners of Dos Equis. The Most Interesting Man in the World campaign first launched in 2006. It catapulted the brand to enough success that Heineken noticed and bought the small Mexican brand in 2010.

Goldsmith carried the brand as spokesperson until 2016...a good ten year run for him and the brand.

It hasn't taken long for the brand to tank. Like everything, it takes much longer to get a brand to a winning share than for it to fall.

Droga5 has a lot at stake here as a creative shop. Whether they have the talent to save this brand is yet to be seen. Beer drinkers are loyal despite what the advertising may be most times. However,
with this particular brand, much of the cache came from the Goldsmith association. Sounds silly.
But this is truly a case study for how powerful advertising and brand building can be.

I offered my point of view on how I would have coached a creative group to approach this brand with any new ideas. And it still stands.

However, Heineken is a very traditional company (I know, I worked on the brand). It is classic  CPG 101. And getting around this monster obstacle will require masterful handling. It will be interesting to see if Droga5 can do this.

I wish Droga5 well and they have my sympathy. This will be a make or break assignment for their creatives.

Fasten your seat belts and lets head for Mars!

Posted by The Fox and Hound at 8:33 AM No comments: