When Ikea saw the new designer handbag by Balenciaga that looked identical in color, shape, size to their signature Ikea Frakta bag but at a much different price point, Ikea was on it.

Urged by their agency partner Acne, the Ikea in-house creative group quickly came up with a brilliant ad "outing" French fashion house Balenciaga for shamelessly stealing their iconic bag design. And in Ikea's inimitable fashion, they set about to make sure anyone who was in the market for a true fashion
statement bag, knew the true original from the copy. 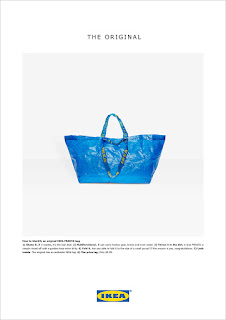 How to identify an original Ikea Frakta bag1) Shake it. If it rustles, it’s the real deal.2) Multifunctional. It can carry hockey gear, bricks, and even water.3) Throw it in the dirt. A true Frakta is simply rinsed off with a garden hose when dirty.4) Fold it. Are you able to fold it to the size of a small purse? If the answer is yes, congratulations.5) Look inside. The original has an authentic Ikea tag.6) Price tag. Only $0.99.
Balenciaga's bag goes for $2,145.


Again and again Ikea as a big box retailer turns that stigma on its ear with its wonderful, imaginatively playful yet strategically strong and right advertising.

I have written about other Ikea ads from around the world and each agency or creative group that handles this account handles it with such wonderful whimsical fun advertising. At every level you find this both in-store, out of home, TV, print, across the board they consistently get it right.

If places like Target, Sears, and some of the other fading retail shops could just do the same thing.
Find your groove and really mine it. Get people to buy into who you are really. Target had it for awhile. Then they overreached, got cocky, failed in a big way and then got scared.

Ikea has never faltered. Never apologized. Never overreached. Never tried to reinvent. And it's because of wonderful fun, cheap products that serve a utilitarian purpose but in a most lighthearted way.

The Swedes do it again!

Sweden's next tourism campaign has turned itself into one giant Airbnb! hahahaha They are so CLEVER! 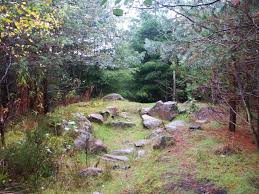 I have worked on Tourism Boards for various countries and states and I bow down to Sweden who is
just shameless at coming up with brilliant ideas on how to entice tourists and using such insightful and delightful ways of doing it.

In 2012 the Swedish tourist board garnered a Cyber Grand Prix award for turning over their countries Twitter account to a different Swedish person each week. Allowing that Sweden has many voices to be heard in their country. This came from a group called Volontaire.

One thing that isn't different in Sweden, like most tourism accounts they are 'switched' to different creative shops every two years or so...to be equitable and fair. Most countries, states do this as well.

This year the campaign is aimed particularly at Americans. The idea comes from agency Forsman &
Bodenfors. I mean, the Twitter idea was setting the bar pretty high and this is what makes these kinds of accounts so challenging. When you have an open and agreeably smart marketing group from the client side, like the Visit Sweden group...they know that each new campaign has to aim to go beyond the last. It's a great position to be in for the tourism board, a daunting but exciting task for the agency.

The idea of turning a country into one giant Airbnb listing comes from their notion (and a very civilized notion I might add) that people should have the right to public access. The right to respectfully roam, walk, discover, sit on a promontory and have a light picnic lunch kind of discovery of a place. It's the Freedom to Roam. It is guaranteed by the Swedish constitution. It allows for
any person to roam Sweden and enjoy all its natural wonders without any disturbance. The term for it is "Allemansratt." So yes, you can 'wander' onto a farmers field, a breathtaking promontory of a private estate, across the lapland, coastlines, mountains to soak in nature and its wonders. And to enjoy the beauty of the terrain and for the sheer joy of walking as a way of discovery. But with such graciousness comes the responsibility to respect that right and to not disturb or destroy.

And why did they aim this at the Yanks? Turns out this idea is pretty foreign to Americans.
As exhibited by the link below, turns out more than Trump likes to erect walls and fences....

There's just something wonderful and bracing about a good walk. Leave the cellphones, leave the city, leave your car, lift up your head and enjoy the walk.

The Swedes in partnership with Airbnb offer up this gentle reminder:

It's a grand, sophisticated, inviting and eloquent idea. Let's hope their target group will think so too.