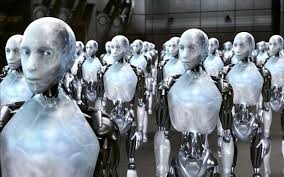 Two Grand Prix Cyber awards were given out this year. One for a charmingly sweet and simple animated story about a night watchman in a mannequin shop. Conceived by Leo Burnett Madrid this digitally animated delight is heartfelt from client Loterias y Apuestas del Estado...in other words the big El Gordo Christmas lottery where many in Europe become millionaires. While this particular spot isn't anything 'new' as far as storyline or emotional touchpoints for dreaming about the lottery win...what is new is the media used to distribute this cutey. This was done just for social media consumption....not the traditional TV, radio or print.

The second Grand Prix was awarded to client ING done by JWT Amsterdam for data driven creative of the possible idea for Rembrandt's next painting..called "The Next Rembrandt". The 'creative' was driven not by human creativity but by math and data and past paintings... pretty dry stuff....and nothing really 'creative' about it...other than allowing a lot of number crunchers to cobble a lot of data together to 'create' a cyber facsimile of what Rembrandt would PREDICTABLY paint next???
Basically it was a number nerd's dream project. And has absolutely no bearing on creativity in the sense that creative humans do creative. Are you still with me???

As an armchair judge, of course I love the Burnett Madrid animation...it is a sweet little story....nothing mind blowing nor revelatory...just simple and innocent and sweet....but what this tells me about social media consumption is not so sweet. Alarmingly it is a red flag for me. Here we have this new social hi-tech capability and what kind of content is being circulated? Well on an intellectual plane of technological capablilities vs. content...we are peddling backwards folks. The ideas and dreck that fills social media is on a level of a toddler. For everyone's obsession and addiction to their various tech tools, this simplistic animation is the best we get????  This is as creative as we can be on this format? Shame on us. It speaks to what is so obvious....a great big WASTE of time. We are creating nothing new on a very important level here; what we spend most of our time absorbed in watching.....and it's a real eye opener to me that this is what is obviously acceptable as great social creative.....when really it has nothing to do with social creative at all....this is just a simple child's tale....cutely animated and rendered like some kind of candy floss cuddly stuffed animals....it's absurd. 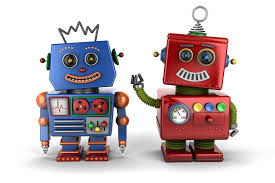 So what does this SAY about the HUMAN level of Creativity that is going on within the digital/cyber realm?

For me it says emojis are the height of cyber creative and for those of you who think this category has any real aesthetic contribution or strategic idea making that is going to blow tech away with it's ability to truly become one with the medium itself .... that isn't possible because we humans have one thing cyber and digital and all the technology in the world doesn't ....  emotions....and developing creative that reaches beyond the cloying simple stuff isn't where humans want to go anymore....
they want no pain, no reality, no inner examination....just serve any creative up plain, cute and simple....like a robot ....

Posted by The Fox and Hound at 5:38 PM No comments: