The Martin Agency launched their first print and TV campaign for Purina animal feeds. The print campaign is stunningly stunning with portraits of a horse, chicken, pig and cow shot by an 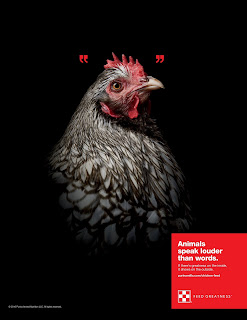 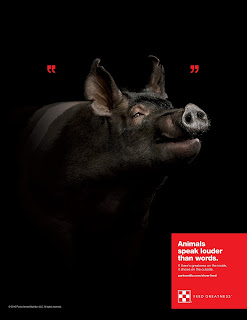 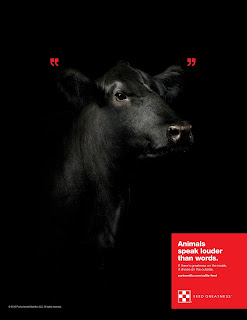 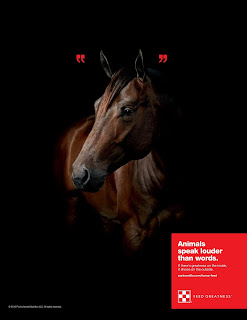 There is minimal copy using the idea that a picture is worth a thousand words they cleverly put the "Purina red" as quotation marks between the heads of the pictures of the animals.

The idea is a good one: that the feed purina provides makes these creatures sound and healthy and beautiful. That the animals themselves speak louder than words works as the idea here.

For as much as it works beautifully in the print, I didn't feel it was nearly as powerful when translated over to live action. Why?

Well the production values visually were not as stunning as the print...

What they could have done was gone for a much more dramatic, extremely slowed down camera view of the horse, making the viewer wonder just what they were looking at. Using a snorkel you could create wonderful slow landscape effects of the contours of the horse before finally revealing exactly what it is you are looking at.

What really was a swing and a miss for me however was the "beer jargon" copy and music which was completely off putting.  The country/Texas-style guitar was monotonous and boring. The copy tone of voice was wrong. The announcer voice was wrong.
While the video's audio says the "Animals speak louder than words" concept it is lost in strategy must have speak but then goes on to hammer it home with a stronger Purina corporate line: Purina Feeds Greatness.

An integrated campaign has to have each media creative approach be stand alone strong yet be similar enough to add and enhance the whole campaign. In this case, it does to some extent with the visual side of the TV but falls down in the audio portion.

Less is more. Let the audience put the pieces together rather than "dummy-ing down" with copy that clients want to wallpaper a TV spot with.

That's what I would have done or pushed for...but it's far easier for me to criticize from my couch at home than coaching and/or struggling for the most impactful first creative from the couch of an ECD at the Martin Agency.

The print is powerful and portfolio worthy....the TV, not so much.