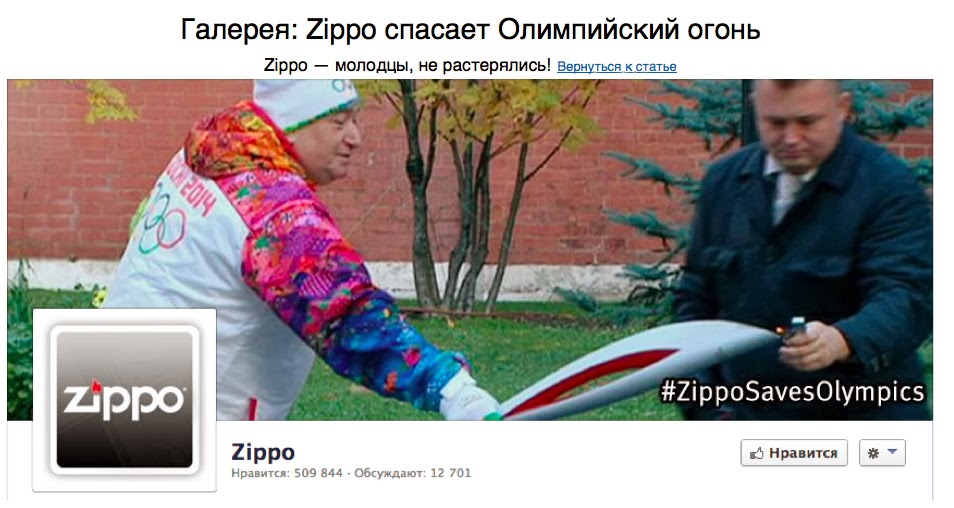 Zippo is apparently being sued now because during the run-up to the Olympics the torches went out several times and in one instance, someone stepped up with a Zippo and lit it!

Fingers are being pointed because Zippo is using this to tout their flames which never go out.

Whether this was an extremely lucky happenstance...like win the lottery time... for Zippo or whether it was a well orchestrated guerilla advertising move, because of course Zippo was not an official sponsor...cudos to Zippo!!!

I love this kind of stuff. Zippo saved the day for the Olympic torch and so they should get recognized.
And if this was planned, then whoever thought of this should get a zillion dollars for the idea, the way it was pulled off and get a major raise in position.

What's so beautiful about this is how natural it is. The flame goes out, someone with a lighter steps up to relight. It's so ordinary a gesture. And it's treated as such....but for an extraordinary symbol.

They say: Timing is Everything. Well, this couldn't have worked out better for Zippo. And I hope they win against the IOC because it was a well meant deed...these torches had been going out all through
the run up to lighting the opening games. Even Putin's torch went out!

If I were the IOC, I would extend the laurel leaf and offer Zippo the opportunity to become a sponsor for the next Olympic games!

Where is the sense of "fair play" here?

Zippo certainly has lit the flame in my heart for them as a brand.