Will Skittles be sunk by Social Media? 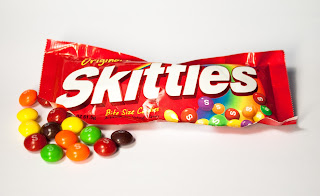 Anyone who is familiar with the Trayvon Martin case knows he was carrying a bag of Skittles and an iced tea when he was confronted by Zimmerman and ultimately killed.

Skittles has a huge presence in social media: some 25 million on Facebook and 100,000 on Twitter.
They had an active engagement with their followers, everyday, even holidays, supplying some clever quip or oddity of interest to kids and Skittle lovers. Currently, they dominate the confectionary market among young kids and teens as the most popular candy.

But since the verdict, Skittles have gone silent on social media.
That's the day Zimmerman was acquitted.

The Skittles thing started with the Sanford Florida police office. Skittles were sent as a public statement of the police's slow response in arresting Zimmerman. They were sent as a symbol of protest.

Activists have since adopted the confection as a symbol of racial injustice among youth and the circumstances surrounding Trayvon's death. Skittles have also been bought in bulk and sold as a means to fundraise for the Martin family and used for other Trayvon initiatives.

Now Skittles is caught in the middle of a very difficult situation. To say anything on social media  regardless of how innocent or clever or innocuous, could be misconstrued by their huge following.

Skittles is caught in a Catch 22.

There is a great lesson here about social media's power. Personally, I predict, on any level, on every level, social media will be proven eventually to be a very dangerous outlet. Not just for huge brands like Skittles, but for everyone...from the biggest to the smallest contributor.

I have always felt Social media is a bad idea.
No matter how good intentioned one might be by joining in the circle, no matter how much fun it might seem, no matter how it may seem to establish repoire, begin a relationship with or promote dialogue with a brand, you run the very big risk of things going awry aka Skittles.

Social media is real time fast--too fast for its own good. Once the drums are beating they're hard to stop.

Social media can turn into a witch hunt.
If followers get it into their heads to go after you, to use you in whatever form, you are powerless to stop it. And like most situations that are crowd sourcing, it is fickle, hungry, constantly circling looking for its next victim and lives on the edge of mass hysteria.
Facebook and Twitter are immediate and swift to judge. Facebook and Twitter expose you by your own choosing and can be devastating if you are on the receiving end of opposing opinions. Facebook and Twitter allow comments and judgments to build instantly. Let's be honest, for the most part, they are a simplistic public gossip forum on a large scale. And the bigger they become, the more powerful they are.

This is not meant to be a comment about the Trayvon Martin outcome.

This is meant as a cautionary example and case history for what can happen to a massively popular brand. A brand whose content was carefully crafted, managed by corporate strategy with full corporate oversight and became a hugely followed success on social media. This is the risk every brand/person takes when you jump in a public pool and allow your position to become fodder on an open forum. You leave yourself vulnerable to being silenced by the very successful social presence you created.
I am sure this blindsided Skittles. And I am sure they are trying to figure out strategic next steps to maximize the brand and minimize the damage. And I am sure there are huge costs, and not all financial, that Skittles never figured they would have to factor into their planning. It will be interesting to see how Skittles moves forward from here. Who would ever have imagined this fun, innocent brand would be co-opted into as big an emotional symbol it has become. It has gone viral in such a completely unforeseeable way, that it has silenced the brand on social media.