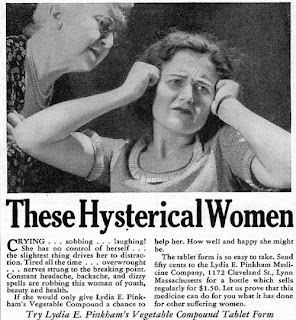 Poor e-trade....being sued by Lindsay Lohan...sheesh how feeble is that. Like we really know her as just "Lyndsay" ... not. She is the sad product of being a Disney kid star who had one hit...an unremarkable remake of the Parent Trap where she plays twins. Since then, her p.r. firm has been working quadruple time always throwing something, anything in the Metro or 24Hours using the tactic that "bad publicity is better than none." She was also just recently dropped by Ungaro or one of the fashion houses in Paris...and rightfully so. Lindsay should just fold her tent and gracefully fade from whatever scenes she tries to create. No one really cares. And her twitter "friends" sadly don't realize that again it is her p.r. machine that writes this crap and is the job d jour as I have said before, for all unemployed copywriters or wannabe copywriter/texterwannabees.
It's time for some Lydia Pinkham's vegetable compound tablets for Lindsay. She might do well to be the spokesperson for them.
On an even sadder note, I am sure it never even occured to Lohan to sue because originally she was bragging on her own site about e-trade using her name. So again, she is following her lawyers bad advice by pursuing a ridiculous suit against e-trade and forgetting that what is really going on is the shameless possibility that all everyone really wants from Lohan is her money.
Posted by The Fox and Hound at 10:07 AM No comments: